There are nonstop flights from New York to Johannesburg with JetBlue, South African Airways and United - and here are two hotel reasons, established and new, to visit the country.

The Saxon Hotel
First, Johannesburg. The Saxon Hotel, Villas and Spa was built in the early 1980s by insurance magnate Douw Steyn, and he turned it into a hotel in 2000. On February 11, 1990, his good friend Nelson Mandela, whose life sentence had included 18 years on Robben Island, had been released from Victor Verster Prison in Cape Town - and he came to stay. During many months as a houseguest, Mandela wrote “Long Walk to Freedom,” which was published in 1994. The entire 53-key hotel is, today, a living gallery of Mandela memorabilia.

The Saxon has six hectares of gorgeous grounds. GM George Cohen, who has been there since 2005, has a magnificent team of 330 staff who only seem to leave if they need to move away from Johannesburg.

I had stayed in suite 200 before. It exemplifies the best of Africa, with natural woods, superb art, and space. Easy-flip wood shutters at eight French windows look out onto a private terrace and seemingly endless lawns broken up by lakes and enormous trees. 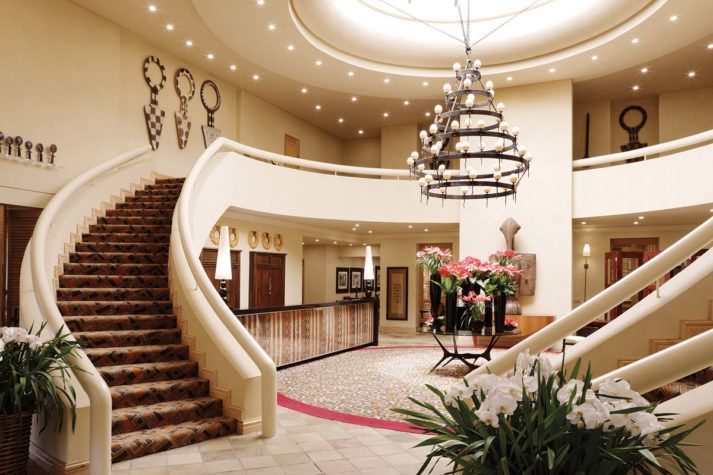 The lobby at the Saxon Hotel. Photo: Saxon.

There’s a first-class La Prairie spa, and a superb Technogym fitness center, with PowerPlate and TRX straps. Exit after working out to a series of pools, one heated for swimming, another alive with fat orange koi.

The Silo Hotel
And now for another reason to visit South Africa – Cape Town’s newest hotel and museum. In 1924, the city had built a 187-foot tall silo complex to store grain for transport to Europe. Architect Thomas Heatherwick, who partners in the U.S. with The Related Companies, has turned the main 11-floor building into the suitably named, 28-room The Silo Hotel. At its top is a glass-sided swimming pool and a glass-sided platform for 360-degree views, including Table Mountain.

Each bedroom is unique. Designer Liz Biden, the face of her family’s Royal Portfolio, does bold, with a fuchsia closet here, a Day-Glo lemon sofa there, and one-off bespoke art works that each make a statement.

GM Luis Pinheiro has attracted and trained a team that performs like the Cleveland Orchestra (our lunch server was formerly teaching in his native Zimbabwe).

Another big plus is that the hotel is conjoined with the Zeitz Museum of Contemporary African Art, MOCAA. Heatherwick literally sawed through the insides of the upright tubes of silos to create a memorably awe-inspiring ambience. This is such an amazing museum, indeed, that it is, by itself, a reason to put Cape Town on any itinerary.

I took one of MOCAA’s interior elevators up to the sixth floor, where a restaurant-with-views does good business. I walked down the stairs, looking at exhibits. These are pieces collected over the years by Jochen Zeitz, the German who transitioned Puma to new owner Kering in 2011; as well as co-founding the B-Team sustainable initiative, Zeitz started the Zeitz Foundation for Intercultural Ecosphere Safety to support sustainable solutions that balance conservation, community, culture and commerce. His African art collection is unlike anything I have ever seen.

There is, for instance, a series of painting-like photos of people in fancy gear wearing eyeglasses that look like sculpted saucer rims – these are 33-year old Kenyan artist Osborne Macharia’s vision of a fictional posse of opticians wearing night-vision specs to fight the Mau. I also loved a Day-Glo yellow ceremonial throne formed from discarded bits of farm equipment. Yes, yet more color.

“It’s absolutely critical to keep your team engaged and consider the mid- and long-term impact before making any decisions. Stay connected to all stakeholders and keep the teams informed.”

How to Stay Sane and Productive While Working From Home

Top Stories
AmaWaterways Will Launch Its Nile Return in 2021

The AmaDahlia will operate seasonally from September through May, sailing the 11-night, cruise and land “Secrets of Egypt & Nile” itinerary from Luxor to Cairo and back.

The high-net worth Robb Report magazine describes how some resorts are hyper-focused on delivering unique experiences for wealthy clientele.

From glitzy West Hollywood to the undiscovered beaches of Tuscany to Mumbai’s bustling city, these independent properties uniquely feature their local cultures.