Tauck has unveiled the first images of ms Andorinha's interiors, showcasing a décor and design influenced by elements of Portuguese culture as it's set to sail exclusively along the Douro River.

A recurring design theme on the riverboat is th traditional painted ceramic tiles, or azulejos, located on its main Compass Rose restaurant and Arthur’s, an alternative dining venue on the ship’s Sun Deck. Fabric facsimiles of the tiles accent one wall of each cabin, with the cabin’s throw pillows and carpeting continuing the theme. Within the ship’s atrium, railings, carpeting and lamps all feature curving patterns reminiscent of azulejo designs. 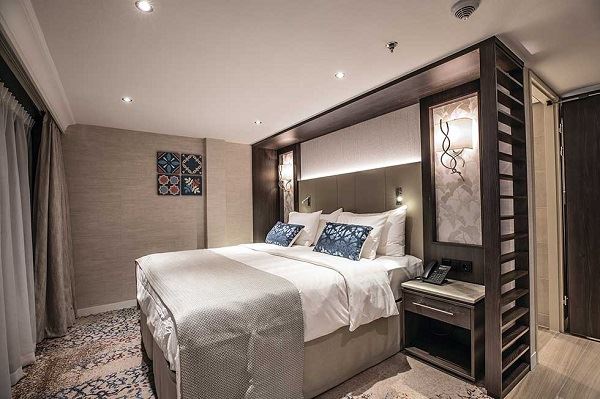 A second recurring theme aboard the Andorinha are grapevines, reflecting Portugal’s 2,500 years of winemaking traditions. Cabins and suites all feature wall lamps with decorative metalwork suggestive of grapevines, and each lamp is backed by accenting wallpaper panels that also echo the theme. The Andorinha’s reception area features a large, circular, domed ceiling light with brass “branches” that were custom-cast from actual grapevines.

Throughout the Andorinha, numerous furnishings have been sourced from top-tier Portuguese suppliers, ranging from some of the ship’s lighting fixtures and furniture to the luxury Portus Cale toiletries provided in each cabin. 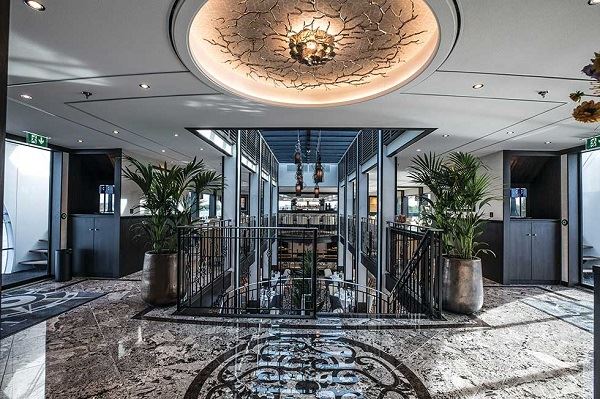 The Andorinha is set to sail on its first cruises along the Douro in April, following its christening in Porto on March 31.

Tauck is offering three Douro River itineraries aboard the Andorinha in 2020; a 12-day journey that bookends a seven-night Douro cruise with two-night hotel stays in Lisbon and Madrid, an eight-day “cruise-only” itinerary along the river, and an eight-day Tauck Bridges cruise designed specifically for families.

“Now that our repatriation operations are over, it seemed only natural to donate our unused protective equipment to those who need it most, namely those in the health services. It’s thanks to everyone’s contributions that we will overcome this terrible crisis.”

1. Write a Letter
2. Make a Personal Connection
3. Livestream a Q&A and Engage on Social Media
4. Audit Yourself
5. Add to Your Portfolio
6. Make Sure Your Email Database is Ready to Go
7. Learn Something New Every Day

Visit GoCCL.com and @CarnivalTrade on Facebook for Carnival’s tools and resources during this challenging time.

“Without our travel partners we are not in business, and it was in our DNA to make a difference for our travel advisors,” Royal's Vicki Freed said during a roundtable call on Monday.

Hurtigruten Extends Suspension Until May 12

All of Hurtigruten’s cruises will be suspended until at least May 12, with some pushed back further into the summer because of travel restrictions.

The news brings an end to a long journey for both crew and guests.

Zaandam and Rotterdam Arrive in Florida Thursday, Waiting to Disembark

According to Holland America, there are nearly 1,200 guests onboard who are fit for travel per CDC guidelines and all guests would be transferred straight from their ships to charter flights home.

The policy will now be available for existing and new bookings on all of Royal’s brands—RCI, Celebrity, and Azamara—through Sept. 1, 2020.

Norwegian Cruise Line, Regent, and Oceania Suspend Sailings through May 10

Norwegian Cruise Line Holdings has extended its voluntarily suspension of sailings for all of its brands—NCL, Regent, and Oceania—through May 10 as part of the global efforts to help contain the spread of COVID-19.